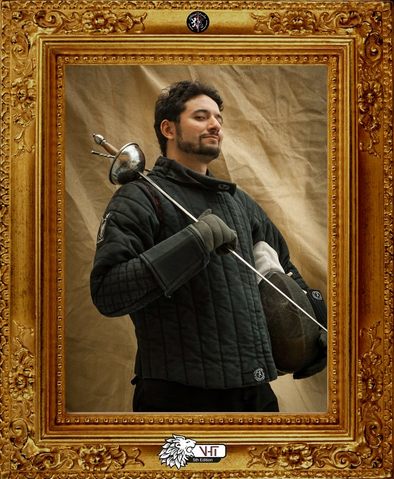 André practiced several martial arts in his life, including Judo and Kung Fu Sid-Pal-Ki. In 2008, he started being a member of ancient fencing Club called Associació Esgrima Antiga de Santpedor and later on, in 2014, he co-founded a new club named Associació Esgrima Antiga Catalunya Central, in the city of St. Fruitós (Barcelona).
Since then he has been teaching Rapier after having been taught by his teacher and the old treatises of authors like Pacheco, Carranza or Lorenz de Rada. Later on, he has been extrapolating his use of the rapier in the small sword. Using one of the “recent” treatises of Destreza based on this weapon, by the author Antonio de Brea.
Even if he has always been surrounded by Verdadera Destreza Masters, he always has been tendency in using “the other side of the coin” (as he would say) applying techniques during his combats from “Vulgar Destreza”, which allowed him to win several competitions along his career.
He has had several contacts with the Olympic fencing association since he claims that both martial art & the sport should be still connected, and participated with his club in doing exhibitions at the Finals of Olympic Junior World fencing championships (category epée) for 3 consecutive years.
Since he came to Canada, on August of 2016, he has been member of Arte Dimicatoria Montreal and in 2017 he became instructor of Rapier at La Compagnie médievale.
He enjoys the ancient fencing and he takes it seriously even if he always claims, “Life is too short, smile and laugh!” The most important things in his classes are the values that should be in all martial arts: respect for the opponent, self-modesty, and love for the art.

Achievements:
Spanish Rapier and Smallsword
- Introduction, Historical features of the Rapier and smallsword and how they shared a time in history.

- Discussion about the treatise of Manuel de Brea: The convergence of two weapons in one art.

- Concepts and practice of the Destreza of the Small sword: Stances, distances, movements and counters shared by both weapons.

- Exercises for a fun training and sparring.

- Conclusion about the class and a final *hush hush* point , which will open us on a new discussion, for a later time.