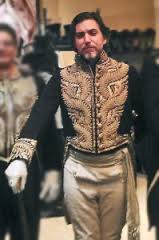 Prof. Mark P. Donnelly
(S.S.S./ E.A.A./ B.F.H.S./ S.W.A.S.H./ H.M.C.A./ K.A.D.S./ V.M.A.A.)
has been studying armed combat in various incarnations since 1982.  After decades of research and training in the disparate disciplines of western martial arts, sport fencing, stage combat, tournament fighting and eastern martial disciplines, he moved from the US to England in 1996 to undertake a PhD in Medieval Archaeology through University of York and Oxford Kings College.
While in England he was one of the founding fathers of the British Federation of Historical Swordplay (BFHS). He began teaching full-time in 1998 and founded the Society for the Study of Swordsmanship (S.S.S.) which expanded to cover seven different academies throughout the north of England accounting for 100-150 students.  He also founded the Edenhill Academy of Arms in 2002 as a specialised research body dedicated to uncovering and translating hitherto forgotten and/or lost combat treatises and military manuals.  With Edenhill Academy (enjoying both a Bishop and a Royal Prince as patrons), he has worked with HM Royal Monuments, English Heritage, the National Trust, National Maritime museum at Greenwich, Sandhurst Military Academy, as well as the HMS Trincomalee, HMS Victory, The Cutty Sark and the Grand Turk.  It was due to his work with the E.A.A., the S.S.S. and the B.F.H.S. that he was assessed and awarded the title of Professor of Arms.
Prof. Donnelly has been honoured to be invited to instruct at major national and international events such as: F.I.S.A.S. in Verbania, Italy; H.E.M.A.C. at Dijon in France; A.E.E.M.A. in Madrid; A.R.G.O. in Prague; Mithras in Malta, B.F.H.S. AGMs and Instructor Training; and, , S.W.A.S.H. at the H.M. Royal Armouries as well as many others.  He has lectured on and demonstrated historical combat in the US at Hampton House, Johns Hopkins University, H.A.C.C, Amherst College and Fort McHenry.  He is currently running weekly classes in Harrisburg for K.A.D.S. – The Keystone Academy of Dueling and Swordsmanship
He is a life-time research associate with Her Majesties Royal Armouries in Leeds England as well as with The Tower of London and with the National Maritime museum, at Greenwich.  He is additionally an experienced stage combatant and licensed fight director.
Professionally, Mr. Donnelly writes and produces historical documentaries for: Discovery Channel Networks; History Channel International; National Geographic; PBS; BBC; and several other international affiliates.
He is also the author and/or co-author of nearly 30 books currently in print (most of which focus on historical subjects).

Will you parry me? Part II: Secrets of Ugly Smallsword

An adversary stands before you, sharp blade in hand, en guarde and prepared to fight.  What measure should you adopt or look to control?  Should you get engaged or avoid engagement?  If engaging, how should you engage their blade?  If not engaging, how can you hope to protect yourself from their assault?  This lesson has to do with the nature of sentiment du fer and with how various treatises address the  differences between sale play, formalized duels and the use of the smallsword for defense in the street.  Source material for this session is derived from (but not necessarily limited to) the following: Hope’s Scots fencing master; Hope’s new method; Hope’s Swordsman’s Vade Mecum; Angelo’s School of Fencing; Bazancourt’s Secrets of the Sword; McArthur’s Theory and Practice of Fencing; MacBane’s Expert Sword-Man's Companion; Blackwell’s Art of Defense; and L’Abbat’s Art of Fencing.  Each and every one of these treatises is well worth serious study in its own right, but in this session we will explore how each of them to varying degrees addresses the issue of application between theory and practicality.