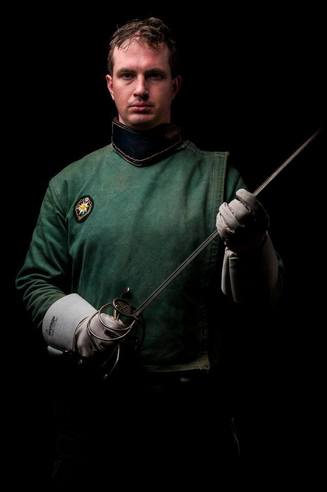 BIO
​Chris grew up in Southern and Central Germany where he was heavily influenced by his surroundings. His first exposure to fencing came quite early as his parents worked at the Corps Palatia Guestphalia House in Freiburg in the early 1980s where he watched the students practice fencing in the yard. Even though he was only knee high at the time it made a great impression on him, one which he has pursued ever since.

His research background stems from a love of history in which he hold a BA from Miami University, organized methodology through being a certified project manager, German native fluency/literacy and an understanding of tactics through studies and experience as a former Marine infantry officer.


Currently he teaches at the Order of Seven Hearts and as a Guest Instructor at Capital Kunst Des Fechtens.  His main interests in western marital arts are focused on studying rapier and smallsword treaties. This includes working on understanding the French smallsword (Olivier) and the German Kreussler systems, He has published a translation of Roux Kreusslersche Stossfechtschule and is working to create a curriculum for Anton Kahn’s Anfangsgründe der Fechtkunst in the near future.