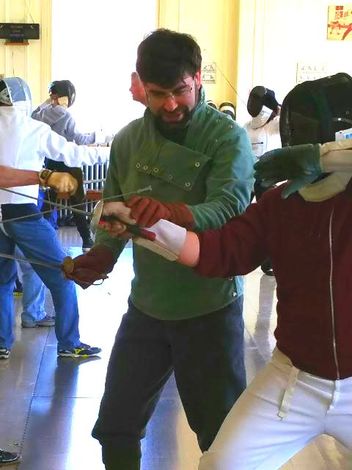 ​Kévin Côté runs the French Smallsword program at the Montreal Fencing Club (Escrime Mont Royal), one of the oldest running fencing clubs in Canada. Although purely raised under Quebec's francophile culture, he is well versed in english as well.

He has been involved in fencing for a bit more than a decade. Initially introduced to modern épée by an elder coach who was proponent of the French classical ways, Kévin then discovered his passion in the French School of fencing of the 17th & 18th Century about six years ago; & has since focused relentlessly to its study.

Kévin has travelled across Canada, to the United States, Scotland, France & Spain to pursue his research & understanding of the Art; and has been teaching at the American Smallsword Symposium since its inception. Kévin has also participated in a few translation projects; notably Philip T. Crawley's edition of The Art of the Smallsword, a translation & expansion of P.J.F Girard Treatise of Arms.
Students will require:
Smallsword, epee, or foil ( French or Italian grip)
Fencing mask
Pair of Fencing Gloves
Fencing  Jacket/Tunic
Knickers or pants.
Non-marking Athletic shoes
Gender specific protection for men and women strongly encouraged.
A very limited number of spare weapons and kit will be available
NO PISTOL GRIPS
NO BARE SKIN